With the recent happenings in Paris you may feel you’d like to show solidarity with our French cousins at this terrible time.

I found these freebies on the marketplace.

I’m walking around with the handheld flag from this set … 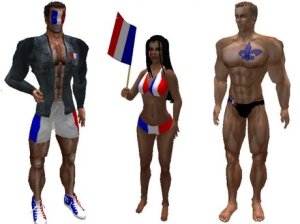 This flag on a pole (which isn’t hand held) can be modified to place the flag at half mast, and I’ve put one outside my store and our bar. 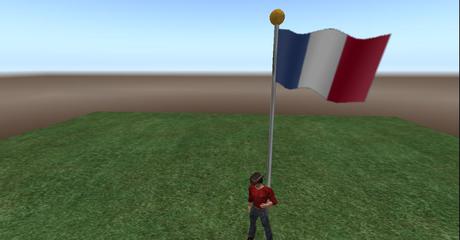 Click either picture to go the items on the marketplace.

I’ve been doing a lot of blogging recently on my other blog, TransgenderTish, but due to the vagaries of WordPress people who try to follow me on that blog end up following this one instead, even though I now have designated that as my primary blog. Sorry about that!

If anyone knows how to make a “follow” in WordPress work only on the blog on which it was issued I’d really appreciate a heads-up.

Caspertech have issued warnings about people sending fake gift cards to people which can then empty your Linden account.

There is no reason to think that the crooks aren’t mimicking the cards used in other vendor systems as well so please read the following, which I have copied directly from the Caspertech wiki, and never accept anything from anyone you don’t know.

If it looks too good to be true then it more than likely is!

END_OF_DOCUMENT_TOKEN_TO_BE_REPLACED

To be fair it has been a busy time. Danny and I have moved in SL (again) and now have a full sim, a couple of parts of which we sub-let to friends, and there has been a lot to do to in trying to create our own little world there, but we’ve also been focusing more of our time on just “having fun” and relaxing. Plus I now have a little hostessing job at Dreams Dance Club which I enjoy immensely.

Real Life has also been quite hectic and sometimes quite stressful for both of us and that always has to take priority.

I go through phases where I just can’t get my head around things from a creativity viewpoint, and when I was feeling particularly down a couple of weeks ago I decided to lift myself up by “forcing” myself to work on things, mainly in Photoshop.

That has helped. I’ve come out of my depressive state to a large degree and have learned and improved my skills in certain areas which will be really helpful to me moving forward and (hopefully) make me more productive. END_OF_DOCUMENT_TOKEN_TO_BE_REPLACED

It’s been ages since I last posted on here, due in no small part to a bout of ill health which has played havoc with my abilities to concentrate on things. But hopefully improvements in many aspects of my life in the outside world are on the horizon, so let’s concentrate here on what’s been happening in Second Life, and there’s a lot of it !

One of the next posts I was intending to write way back when was a review of a gorgeous gown that Danny got me one night while we were out shopping. We had actually been to look at a ballroom that we were thinking we might go to but it was deserted, as they often are, and so he suggested we take a wander around the nearby mall to see if there was anything I liked. We spent ages there, strolling up and down, me looking at things and dismissing them for various reasons … oh, you know how it is girls … *giggle*

Eventually we reached the end of the mall and I was just saying to Danny something like “Oh, well, that was disappointing, nothing here after all…” when something suddenly caught my eye at the back of the very last store and I followed up with “Unless…!!!” …
END_OF_DOCUMENT_TOKEN_TO_BE_REPLACED

Danny blogged last night about the fact that it is almost a year now since we first met in Second Life and about some of the changes that have occurred over that time.

It hasn’t always been easy for us, as regular readers of this blog will know, but we’ve pulled through together and become stronger for it.

Relationships in either world take time to mature and settle into what they will truly become. The stereotype of “boy meets girl, they fall in love, marry, and live happily ever after” can be complicated by so many things, in our case probably none more so than the fact that we are both still coming to terms with our own perceived genders and learning how to feel free to express ourselves in more comfortable ways, both to each other and those around us.

Danny is not just a hunk (MY hunk) in SL but is also totally a male of the species in mind and spirit too, and his acute perceptions and analysis of my personality, expressions, foibles, concerns, desires and general manner have helped me to validate my own feelings of gender, as I hope to have been able to do for him. The love, support and encouragement from my SL friends has also been amazing and must never be overlooked or forgotten.

Danny said to me very early on that he considered I was already “fully formed” as a woman otherwise, as he put it, he “wouldn’t have gotten near me”, but I’m so glad he did because he truly does make me feel like a “Natural Woman” the whole time.

That “Real Life” game out there continues to pour stresses and strains on my daily life, especially with difficulties surrounding my referral for psychological appraisal with a view to my commencing gender realignment, so much so that I am in the process of trying to start up a local TG support group in my area in order to provide an information pool for local transgender people of all ages and to offer an opportunity for people to meet in a friendly, non-confrontational environment where freedom of expression would be encouraged. For someone such as myself with Executive Function difficulties it will be a struggle, but there is a definite need and one could wait for ever for someone else to start the ball rolling.

I am back in business, so to speak, with regard to being able to access Photoshop, something which is a blessed relief having tried and fought endlessly with that diabolical bug-ridden crap-fest called Gimp, so at least I can make some progress with my fledgling SL fashion business when the inspiration strikes.

Less than 2 weeks to go now to the first anniversary of Danny and I meeting, and I’m looking forward to many more anniversaries in the future, both on SL and out there one day in that Real World.

Everything was going so well …

Things with Danny were getting back on an even keel… I had this great new idea for some of the things I want to put in my store in SL, a collaboration project that would bring some totally original designs in… I had a new semi-exclusive dress template that I’d forked out for, which was showing great potential, and I had loads of ideas for how to use and develop… my enthusiasm for building up the store was back on track… everything was going great !

And then this morning I decided to move all the Photoshop files for the new dress into another folder. They were still in the folder they had been in after I extracted them, but now that Danny had come up with a great name for the dress I could “file” it properly in my system. I created the new folder, moved the files across, then deleted the old folder.

The good news is that Danny and I are slowly getting things sorted out. 🙂

We both love each other more than we can even express properly, and although things will be somewhat different from now on we are working together towards understanding each others needs and rebalancing our relationship so that it becomes something we are both comfortable with.

The past 10 days or so have been traumatic at times, I can’t deny that, and the proof has been out here for all to see… worse even than I have expressed at times.

I am beginning to be able to refocus though, and I’ve only cried once today so far… when I read Danny’s blog post and emails this morning 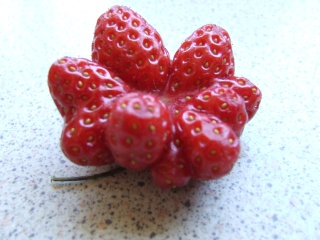 Yes, there are NINE nodules to this one strawberry

I went to the doctor yesterday and subsequent to a lead she gave me I have found some more useful sources of information about my rights and options with regard to my gender issues, and also made a connection which has given me an idea and some much needed motivation regarding my budding fashion business in SL, but more on that in another post.

For now I have a cart at a cart sale to furnish, and I’m already running late !!! … 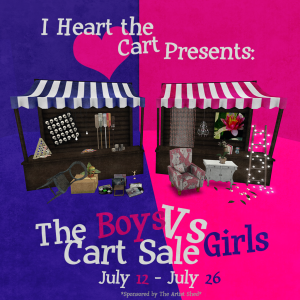 The Boys Vs. Girls Cart Sale 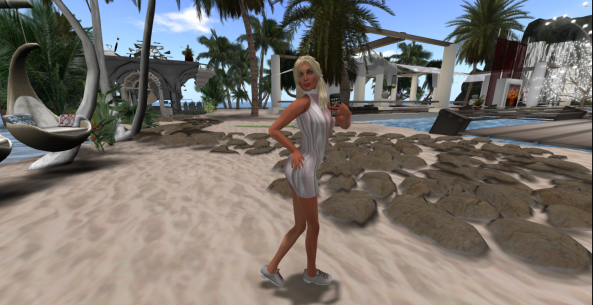 My first selfie, in either life

A transgender friend of mine on SL posted a youtube link in the group chat one day a few months back.

She had been taking a selfie at some point every day for the past year to show the progress she had been making since she started on the hormones and had put them all together into a presentation, one picture a second.

Having interacted with her on odd occasions, both directly and through the group chat and meetings, having heard a lot of her story and having seen how open, helpful and sympathetic she had been to other group members it was lovely to be able to see what she looked like in real life and to follow the progress of her transition.

Looks-wise she’s just an “ordinary person”, someone you wouldn’t look twice at if they passed you in the street, but as the pictures had moved on her inner beauty, confidence and happiness showed through more and more, and it was a joy to see. Her future life as a woman is certainly destined to be a happy one.

Everyone in the group who saw the pictures was so complimentary and it was a lovely moment as we were all giving her verbal “high-fives” and “way-to-go”s.

So, although I won’t be doing it every day, at least not just yet until I can get on the hormones, I’ve decided I’m going to start taking selfies too and keep my own record of how I’m “coming along”.

As things stand I still have to live my day-to-day life as a man, which I detest, but after a year of not having it cut my hair is long enough now that it could possibly sustain some ringlets and I’m going to make a small pony-tail on occasions, even if only for the sake of tidiness.

I seem to be developing a little in the boob area too, but whether that’s some psychosomatic change that’s occurring or whether it’s because of an age-related body fat situation I don’t know, either way I’m not knocking it! In private I could possibly get away with wearing one of the smaller cupped bras, if I ever had the chance, and that tells me now is the time to start keeping a record.

Maybe one day I’ll be posting a link like she did.

Looking at life from the eyes of someone born in the wrong body.

Philosophy is all about being curious, asking basic questions. And it can be fun!

Injustices we may not be aware of

The journey of a 20-something woman discovering her sexuality

Funny Blogs With A Hint Of Personal Development

Words and Pictures from the Middle East

This is me a transgender woman

Stories and photos from Scotland

Tales from the mouth of a wolf